Many recreational opportunities exist on the 20-mile long, Reelfoot Lake. But for duck hunters looking to fill their limits under the Mississippi Flyway, the big draw are the ducks! As the only naturally occurring lake in the state, this unique northwestern Tennessee gem is home to a dizzying array of waterfowl. With tons of birds and stunning views, it is a duck hunter’s paradise.

Whether you hunt with us here at HD Guide Service or on your own, here are some of the major duck species you’ll encounter at Reelfoot. 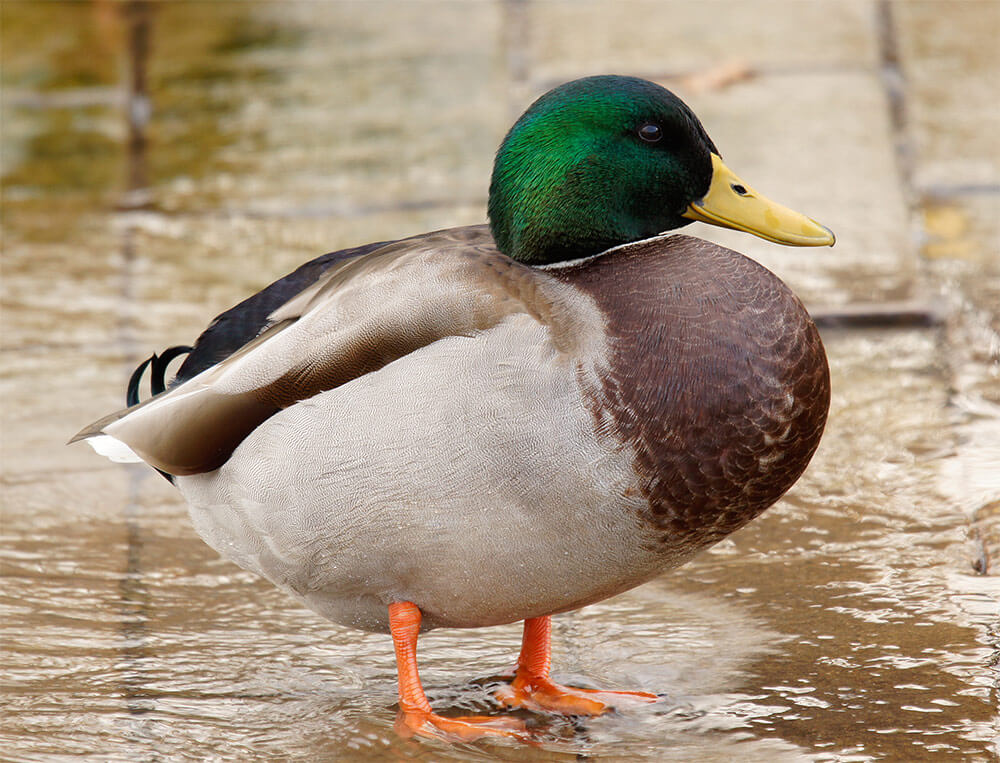 It is hard to mistake the green iridescent head and blue patch on the secondary feathers of the male mallard. Perhaps the most recognized duck species, the mallard is plentiful on Reelfoot Lake. A hefty, large-bodied “dabbling” duck, mallards weigh roughly 2 to 3 pounds and have a wingspan of 2.5 to 3 feet. Rather than dive for food, they eat mostly vegetation by submerging their head and neck.

Mallards will eat seeds and grub for roots on land, while also eating aquatic and land-dwelling insects. According to The Cornell Lab Of Ornithology, the mallard duck is the ancestor of nearly all other breeds of domestic ducks. The mallard is a highly sought-after duck that is considered one of the tastiest on the list. 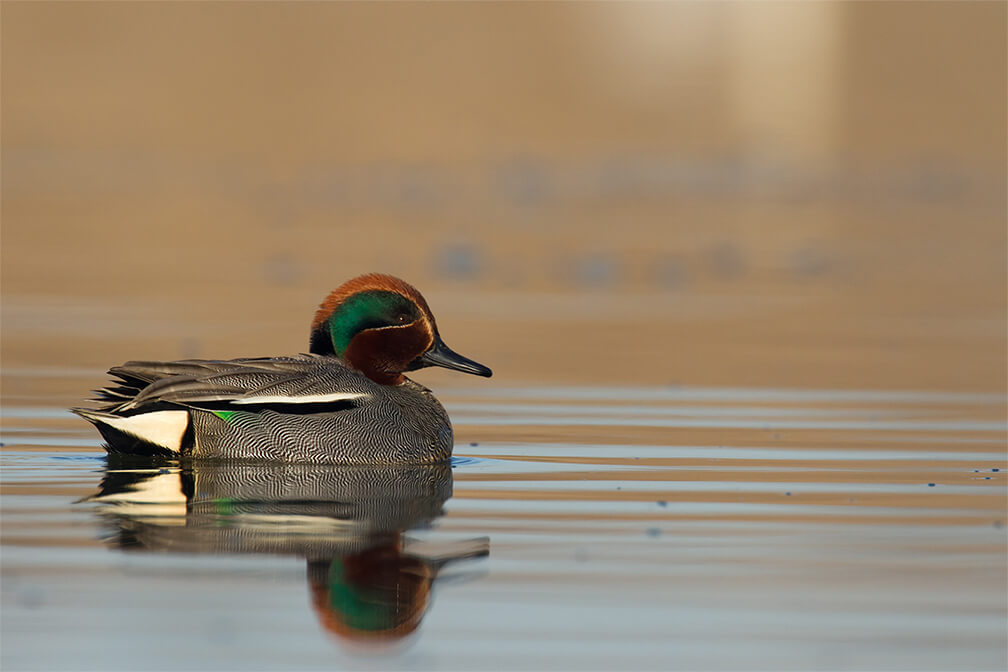 Another very common duck on Reelfoot Lake is the green-wing teal. The green-winged teal has a chestnut head, green eye-stripe that extends around the back of the head, and a grayish body. A vertical white strip extends from the waterline to the shoulder. Both male and females have green wing patches on secondaries, but these may not be visible unless the bird is in flight.

Subsisting off mainly aquatic invertebrates and seeds, you’ll find them feeding in shallow water and mudflats as well as agricultural fields. Only weighing up to about a pound, the green-winged teal is a small duck. It may be small, but it’s big on taste! Green-winged teals are one of the finest tasting ducks out there. 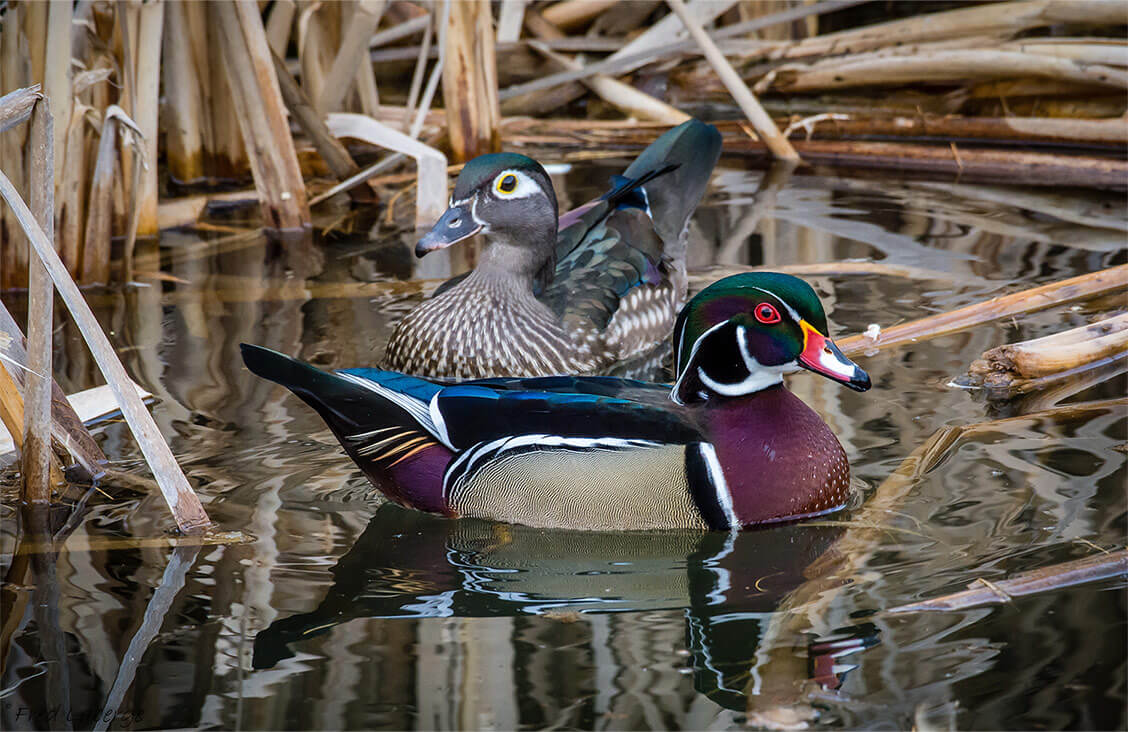 A gorgeous iridescent green and chestnut, the ornate wood duck has a crested head with various white stripes and a red eye. The upper breast is chestnut with white speckles and its profile is that of a thin neck, short wings, and a long tail. About the size of a mallard, the wood duck eats mainly aquatic vegetation and insects, but will take to land to eat everything from soybeans to blackberries. “Woodies” are not only stunning to look at, but they are a fine grilling bird! Juicy and tender, you can prepare wood duck just about any way imaginable without worrying about off-putting gaminess. 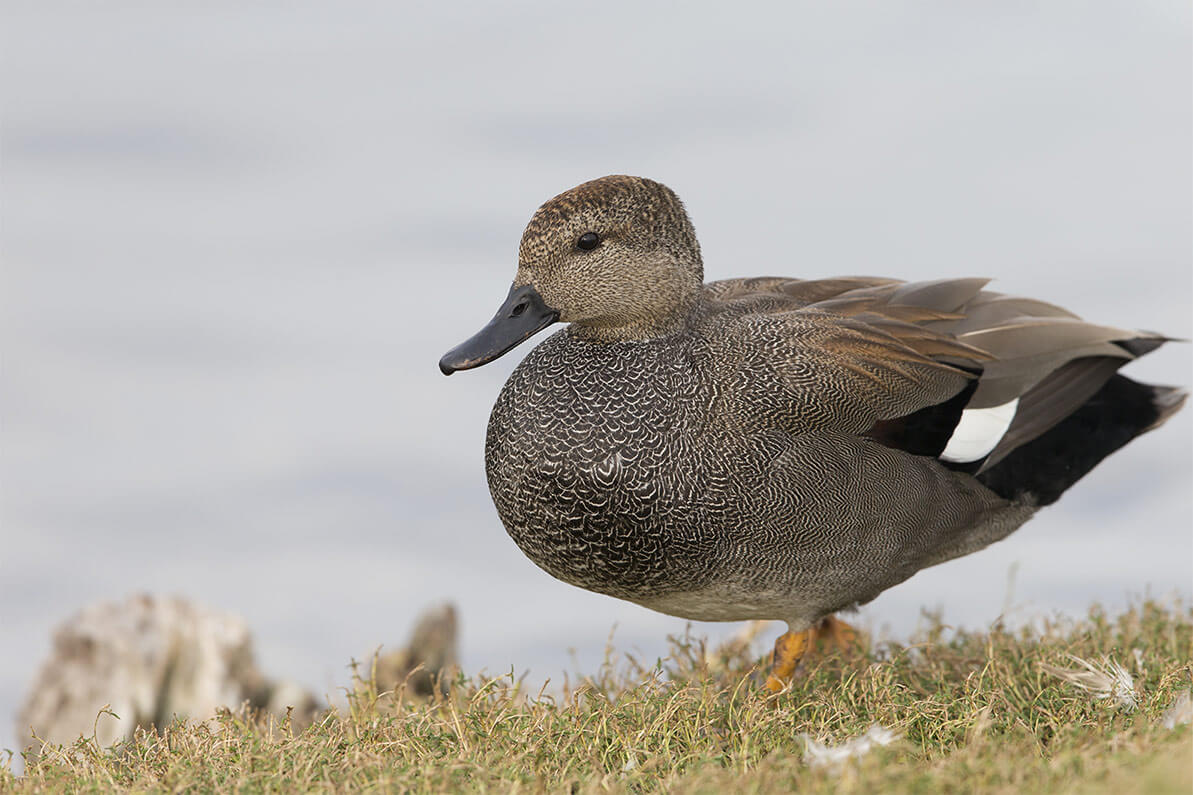 A visually understated bird, male gadwalls or “gray ducks” are intricately patterned gray-brown with a black patch at the tail. Males and females have a white patch that is visible while in flight, and sometimes while swimming. Another non-diving duck about the size of a mallard, gadwalls will actually steal food after diving ducks have done the hard work! Tender and only slightly gamey, this bird is great for grilling or any other method that doesn’t require you to “cover up” the taste of the meat. 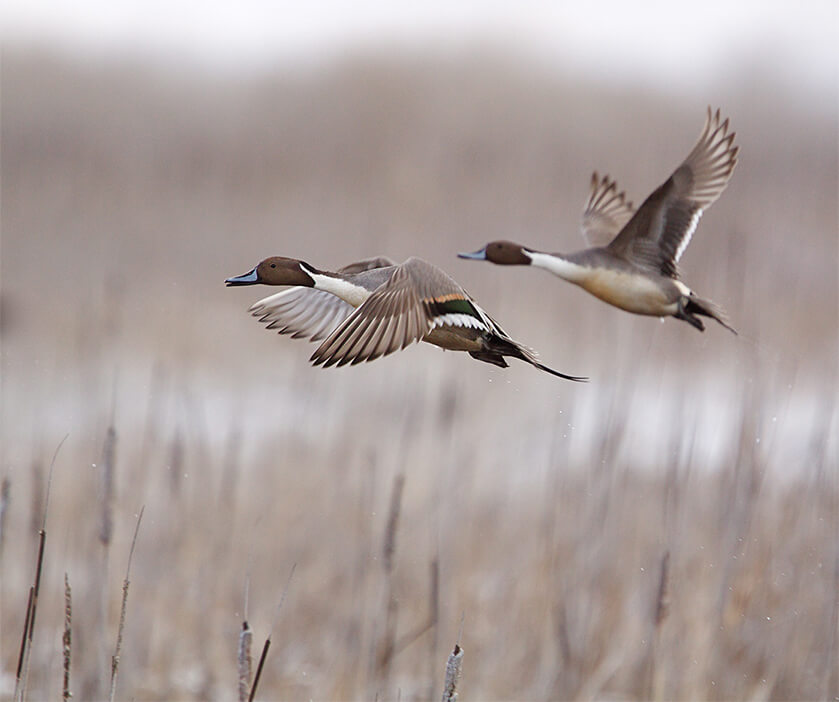 Slender necks and long pointed tails give the pintail a certain swan-like elegance. The chocolate brown head has a white stripe that cuts down the back of it, giving way to a gleaming white neck and breast. Secondaries have a green patch that is more noticeable while flying than at rest or swimming. Pintails are very cool birds. Adding a “sprig” or two in your limit is a prize for any avid waterfowler! Brine it, grill it, fry it, or throw it into gumbo – you won’t be disappointed by this mild-flavored duck. 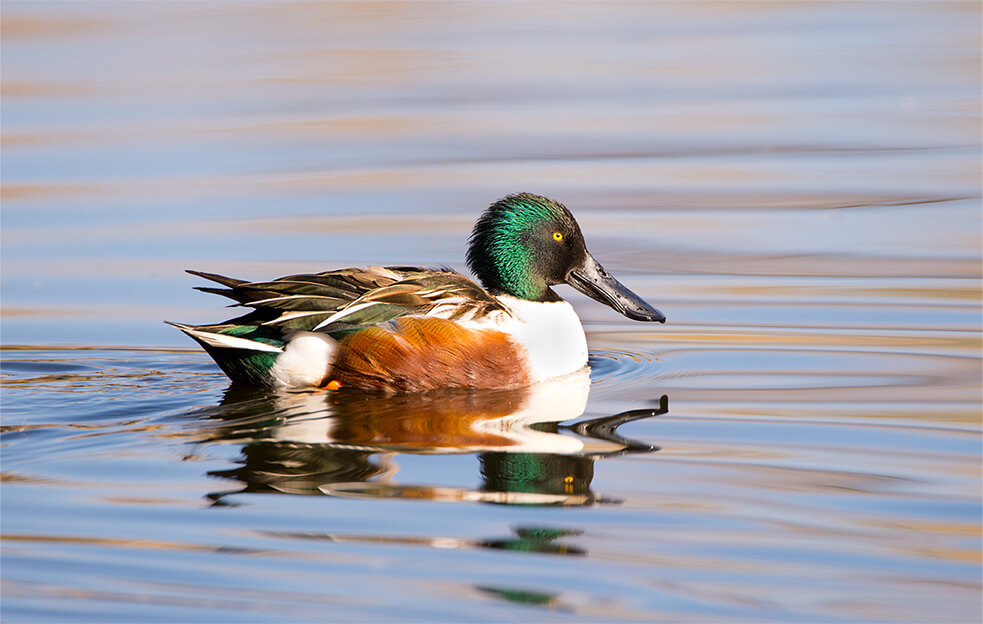 The crow-sized northern shoveler is hard to miss. Reminiscent of a mallard with a 2.5-inch shovel-shaped black bill, their color patterns are bold white, blue, green, and chestnut or rust. Shoveler’s wings have green secondaries and powder-blue upper wing coverts. Spoonies often don’t get much respect. It may be because of the way they sift tiny crustaceans and aquatic invertebrates through the comb-like structures (lamellae) that line their bill. Sure, they tend to have a muddy taste, like you’d expect from tilapia or ruddy ducks. But you can prepare them in a way that minimizes the stronger tasting ones. Consider brining for a few days or put it in a stew. 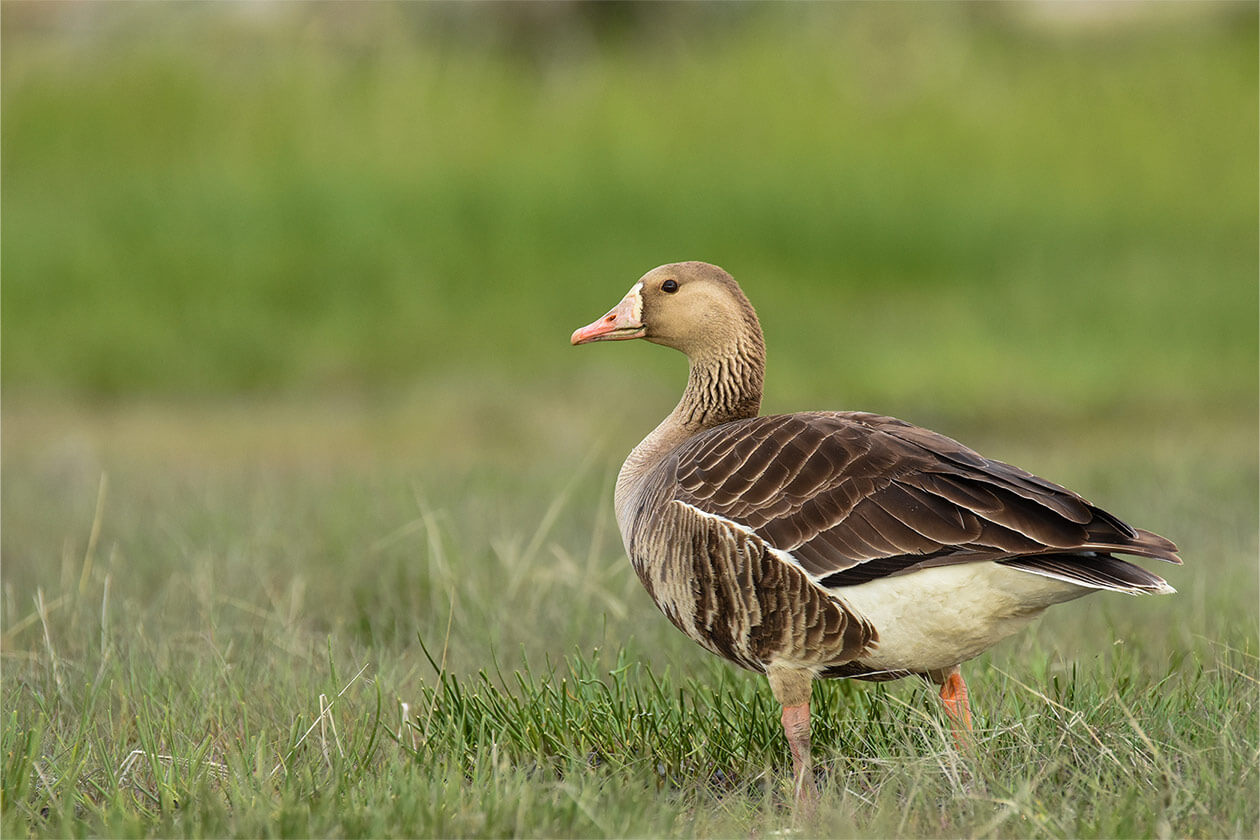 The specklebelly or greater white-fronted goose is a phenomenal meal in the making. Considered superior in flavor to Canada or snow geese, it is hard to go wrong with this stocky, 4- to 6-pound brown goose that is a bit smaller than a Canada goose. Color patterns on a specklebelly are mostly brown with a white face patch around its pinkish-orange bill. The black barring on the breast is broken up giving a “speckled” appearance. The undertail is white and when the specklebelly goose is flying, a white-shaped “U” is visible at the base of the tail. When the bird is at rest, a thin white line across its side is visible.

The highly prized specklebelly is a wary bird that provides a good challenging hunt.

You’ll find these duck species along with blue-winged teals, coots, ring-necks, wigeons, goldeneyes, buffleheads, lesser scaup, and more. Tennessee offers world-class waterfowling and we hope you’ll come down to experience the ducks of Reelfoot Lake and everything northwest Tennessee has to offer! If you’d like to book a hunt with HD Guide Service, contact us to book your hunt today! Now that you know the types of waterfowl that Reelfoot has to offer, check out our blog on The Best Ways to Cook Duck!